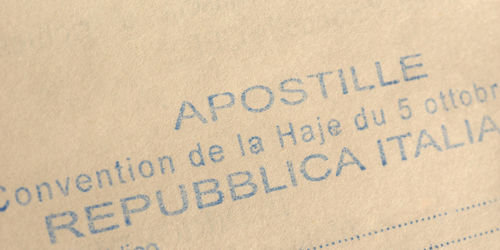 Lately I have been receiving inquiries from clients regarding sworn Turkish translation services for documents requiring apostille certification. In this post, I would like to share my knowledge on the subject as a sworn court translator and try to help clear up some of the questions that potential clients looking to get certified Turkish translation services may have.

What is an Apostille?

Apostille, originally a French word meaning ‘certification’, is a document that authenticates the origin of a public document (such as a birth, marriage or death certificate, a judgment, an extract of a register, a certificate of good standing, or a notarial attestation etc.). It can be thought of as an international certification of a notarized document, which is an attestation done as per the domestic law of a given country.

Apostille certification was introduced in 1961 by the Hague Convention which aimed at Abolishing the Requirement of Legalization for Foreign Documents. Prior to the Hague Treaty, a document needed to be used abroad had to be certified by the Ministry of Foreign Affairs of the country of issue, which then had to be sent to the relevant government agency or embassy of the receiving state. This process is pretty much the same today for the countries that are not party to the Hague Convention. The Hague Convention has rendered such bureaucratically burdensome, complex and costly process easier by dispensing with some of the formalities involving top level domestic and foreign governmental agencies.

Turkey is a party to the Hague Convention, and as such documents apostilled by the relevant Turkish governmental bodies are validly used in the countries that are party to the Apostille Treaty. The competent authorities that are authorized to issue an apostille in Turkey include the Governor’s Office, District Administrator’s Office (Kaymakamlık), High Criminal Courts and the Presidency of Justice Commission.

It should be noted that, in order for a document to be apostilled by a competent authority in Turkey, it should first be translated into the language of the receiving country by a Sworn (Certified) Translator. Such translated document -bearing the stamp and signature of the Sworn Translator- should then be notarized by a Notary Public with which the Sworn Translator is affiliated. Following notarization, the document should be submitted for apostille certification by one of the aforementioned authorities, which should be located in the same province or city as the Notary Public where the document was originally notarized.

Apostille certification is done for an indefinite period of time, and thus an apostilled document can be used until the original validity date of the document (such as a driving license or an academic certificate) expires.

While the types of documents that require an apostille vary greatly, the most common types of documents I translate for certification purposes include academic documents, notarial certificates, legal documents, corporate and financial documents including contracts, articles of association, trade registry records, which are usually intended to be submitted to consulates and foreign governmental agencies.

Being a Sworn Translator accredited by the Turkish Ministry of Justice and holding Sworn Translator’s Certificates issued to me by a number of Notary Offices in Istanbul, Turkey, I am capable of providing translation services required by the Hague Convention.

I have been providing sworn translation services for various clients located abroad. On a number of occasions, I personally visited the Notary Public, where my Sworn Translator’s Certificate was issued, to have my client’s documents, including the sworn translations thereof, notarized and sent the notarized documents back to my clients using first-class postal services. I am willing to go to notary offices, courts and post offices on behalf of my clients who, due to the physical distance, are not able to go to the said places themselves. However, in such cases, I require the payment of notarization, apostille certification and postal charges (I exclusively use DHL services) in advance prior to translation. You can find more information on my process here.