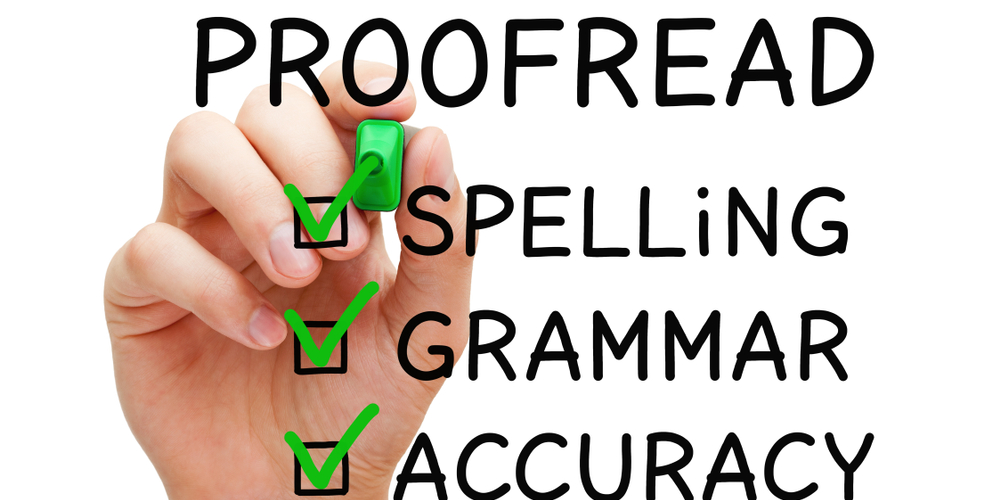 Proofreading is an important part of the Quality Assurance process to ensure error-free translations. Proofreading is often confused with editing, revision, review and checking, and, more often than not, such seemingly different terms are used interchangeably to refer to the same process: having the work of one translator reviewed by another translator in order to deliver an accurate and error-free end product.

As a professional translator, I place great importance on quality check and proofreading, and always have my work checked and proofread by another trusted colleague. Although I perform a complete quality check after finishing a translation and read my work from beginning to end at least twice to restore my peace of mind, it is always possible that there are mistranslations and errors that I overlooked. In such cases, another pair of eyes makes all the difference and spots the errors that you would otherwise never notice yourself. This is the reason they call this process the ‘four eyes principle’, and it is essentially important if you want to deliver high quality translations and retain your clients despite the costs (payable to the second linguist) involved.

Serious translation agencies always hire one translator and one proofreader/checker/editor for each translation project, however small or big. They may also have in-house staff to deal with such tasks, but it is always a good practice to hire a competent reviewer/proofreader in language pairs that include a less popular language –for instance, a translation agency based in Leeds, UK may not employ an in-house Turkish or Czech translator to check the accuracy of translations into those languages from English.

Having established the importance of proofreading, in general, I’d like to raise a couple of ethical points in relation to proofreading and proofreaders, especially in the context of jobs assigned by translation agencies.

As mentioned earlier, the purpose of proofreading is to deliver accurate and error-free translations. That means checking the target text against translation errors, spelling, punctuation, grammar or stylistic mistakes. It is important to bear in mind the fact that each translator has his/her own style and that their choice of words/preferred terminology may not be the same as yours, and, unless they are erroneously used or else completely at odds with the context, you should respect their style. In other words, the job of a proofreader is to spot and correct mistakes and to alter gross stylistic issues, not to replace words with their preferred words (which usually happen to be the synonyms of the original words) and thereby impose their own style on the translation.

Unfortunately, this commonsensical professional courtesy is often disregarded when a translator is, voluntarily or involuntarily, assigned a proofreading/editing job. It is, unfortunately, the case that translation agencies consider translators as default proofreaders and such translators-turned-proofreaders often get the misguided notion that they are expected to return a document showing full of track changes. This inevitably leads to a lot of unnecessary and uncalled-for stylistic changes when the proofreader fails to spot any genuine translation, spelling or grammar mistakes in the text, and this deliberately or inadvertently results in undermining the original translator’s reputation and style.

Having witnessed more than a few instances of such intentionally unfair assessments myself, I am usually wary of translation agencies asking for test translations. This is because they ask for their regular translators in the language pair in question (which, in my case, is Turkish, a language that no PM could have an inkling as to the veracity and quality of the translated document and thus is totally dependent on the verdict of their regular translator/assessor) to assess the test piece.

In my opinion, employing a translator, who has a direct financial interest in the translation agency, to do the assessment of a test piece creates a conflict of interest and severely affects the chances of a prospective translator in their onboarding process. Proofreading (or rather, assessment in this case) should be done objectively, fairly and without any personal bias in order to deliver a quality end product, and it should not be used as a means of sabotage, settling personal scores and tarnishing the reputation of a fellow translator.

Proofreading is a very important aspect of the translation process that determines the overall quality of a translation. Not every translator is a default proofreader, and has the skills and mindset of a professional proofreader. Proofreading should be done scientifically, objectively and, above all, fairly. It is important to keep in mind that every translator has their own style and, as long as it is in keeping with the context, it should be respected. It is especially important, during the onboarding process of a potential new translator, that agencies entrust proofreading/assessment jobs to third party assessors to avoid a potential conflict of interest. Proofreaders should not abuse their position and spoil the quality of translation in an attempt to tarnish the reputation of a translator.